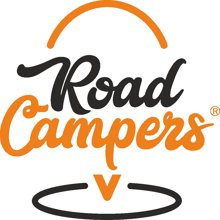 We are just persons! ... who love to travel with no plan and get lost in new places and get along with people, connecting with Nature and simple things, where less is more... That’s how we have born :) We are RoadCampers. Our idea is to create the opportunity to all of you traveling in a simple way with our Mini-Campervans fully equipped, very easy to drive and park anywhere, low consumption and class 1 (toll), with capacity for 2 or 3 adults. Our Mini-Campervans are an economic and practical option to take some days off for a relaxed trip. We believe it! #roadcampers 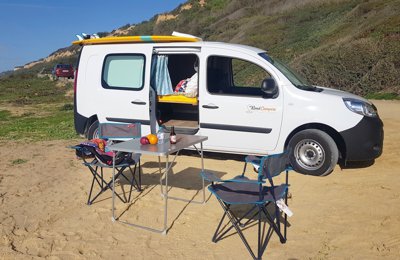 It was an amazing experience!

Ricardo is a nice person ready to help you when you need it. His van is clean and very confortable to drive and to live.

Portugal is a perfect country where you can try an experience with a van and Ricardo is the right person who could help you to have a great trip!

Hello! me and my friend spent 2 great weeks on the road with this van.

It is comfortable, new, clean, easy to drive; great sleeps (in front of the ocean), great dinners.

Ricardo and his wife are two helpful and very nice people.Everything was perfect, thank you so much.

The van was great for our 10 days trip trough Portugal! Although it was not too much space to sleep for two people it's a very cozy and well structured van with everything we needed for our vacation. Also because of it's size it was easy to drive and to get wherever we wanted to go. Teresa and Ricardo were great hosts and very helpful people! Thanks for trusting us with our van, we will come back! :)

We rented the Minicamper for a whole week including a table, 2 chairs, a solar shower and 2 surfboards. The minicamper is something between camping in a tent and a bigger mobile home. It’s surely more convenient to get around with all your stuff, the bed inside, gas stove, etc. in the minicamper, but it has not the comfort of a mobile home. The Martresses could be harder. After a couple days we felt some effects of the wooden slats under mattresses. Table and chairs are highly recommended, since you don’t have much cooking area inside the car. The solar shower isn’t that helpful if you don’t have something around you where to hang it. We actually didn’t use it. The surfboards were brand new, bought by Teresa & Ricardo. If you’re new to surfing or still learning, they work quite good smaller waves. At least, they did for us.

Ricardo & Teresa build the interior of the Camper and manage the rental by themselves. They were very nice and helpful prior to and during the rental.

All and all, we had a great time with the minicamper during our trip along the Costa Vincentina.

The owners who we dealt with when renting/hiring this van were really nice and spent time preparing us a map/journey plan for our time travelling along the coast of Portugal which was really nice. They also picked us up and dropped us back to airport for a pretty reasonable cost as well. They were friendly, honest and had a pretty good sense of humour as well so meant the trip started off on a nice positive note.

The van itself was imaccculate - very clean and very tiding inside. Nothing damaged or broken and everything worked well. It comes with an awesome big fridge that is always cold as it is plugged into a separate battery (meaning the starter battery for the car won't go flat). The overall design and functionality of the coooking area at the back, and the bed was really good.

The vehicle itself was bloody good on fuel, as it is a new car and it is diesel. It handled and drove very well and we didn't have any mechanical issues which was great.

The only downside I would say is that the bed itself was a bit hard, as the matress is a little bit thin, and the pillow were small. We got used to this though and it wasn't a deal breaker.

This van was reasonably priced comapred to others on YesCapa (we believed).

Note to anyone renting a van in portugal: the cost does add up esspecially the tolls - we accumulated 27 euro worth just on our way back from Lagos to Lisbon!

The owners were decent though and we couldn't find a servo on the way back to fill the van back to its original mark, but they did not charge us a fee - only the cost of the missing fuel which was decent.

My girlfriend and I rented the car for 8 days. The car was exactly what we wanted. Small, to get anywhere we wanted and have no trouble with finding parking slots even in cities like Porto. But also really comfortable and absolutely enough space for 2 persons to have a good sleep. There is all you need: bed stuff even for chilli nights, extra battery for your smartphones and cameras and the lights at night (the battery was always charged due to the solar panel on the roof), a little cooking place to prepare some food and coffee, etc. There is also a little fridge that keeps your food and drinks fresh. The car is quite new and easy to drive. It was absolutely clean as it can be. The owners Ricardo and his wife are incredible friendly and helpful with just everything. They gave us tips where to go and we’re also available at any time. You can feel that it’s their passion and so was their service - just perfect

Myself and my wife travelled for a week on the south coast of Portugal with this Camper Van. It was perfect for our needs, light, comfy and easy to drive. We were confident driving either on ground streets and inside cities, parking, etc. It gave us all the freedom we wanted. The inside is tidy and comfy. I'm about 1.80 meters tall and had no issues at all sleeping. The owners provided extra blankets for the cold (which was great since we took only hand luggage with us). The solar panel provides light at night and charge your phone, so you don't have to worry about running out of battery. You can see they've went a great length designing the interior to be as useful and neat as possible. Thank you for such a great job!

Road Campers -
June 2020
Delphine and Pierre were very relaxed and attentive guests. Everything went well and they took care of our van very well :) RoadCampers are waiting for them for a next roadtrip! Ricardo

Sandy and Franc, a couple from Switzerland very friendly. Thank you so much to choose us and hope you come again in Summer :) See you!

Stephane and Caroline are a very nice couple. They traveled away with our van and everything went well. It was a pleasure to meet them.

Elodie & Dino a very nice guys! Very kind and relaxed with an open comunication :) Thank you so much to care so well our van. Waiting you for next time. All the best for you.

Luca was a very nice and adventurous costumer travelling across our country. Happy to meet Luca! Hope to see you again soon for other trip. Thank you! Ricardo

Sabrina and their friends went the italian happy girls! Very kind and cheerful. They take care so well of our van. Thank you so much! Hope see you again :)

Alexander & Pia are a very nice couple :) They took care very well our van with surfboards inside, which was amazing... Thank you so much to choose our van for your experience surfing in Portugal! We are waiting from you again. Regards. Ricardo #RoadCampers

Armin & Barbara were very nice! They were really quite and carefull with our van driving across Portugal :) Our van is waiting for them again next year! Ricardo #roadcampers

Lachie and Ann came from far to travel on our campervan! They are very cool and take care our van very well. Everything went fine... It was a pleasure to meet them and we wait to receive them next time! :)

Tobias and Carmen are a very friendly and relaxed couple :) Very easy and open communication! They took very good care of our van for 9 days traveling in Portugal. It was a pleasure to meet both :) Big hug. Ricardo & Teresa #roadcampers