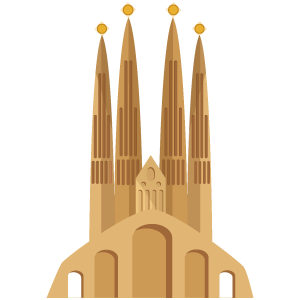 RV and camper rental in Spain

With more than 60 million visitors every year, Spain has many assets that fascinate travellers from all over the globe. Its 17 autonomous communities offer many breathtaking landscapes, each one different from the others. What's more, in just a few hours you can pass from green nature to Wild Western deserts, from stretches of white sand to steep cliff faces bordering crystal waters, from medieval to Moorish architecture, in just a few hours. Spain is a colourful country and a great place to live and share amazing experiences together. With a vast choice of vehicles, renting an RV in Spain has never been so easy as with Yescapa. Choose your RV or camper, the dates of your trip and set off to discover the jewels of the Iberian Peninsula.

Rent an RV in Spain

The city of modernism

Bordering the Mediterranian sea, Barcelona is lucky to be bathed in sunlight for a large part of the year. The capital of Catalonia is home to very rich architecture thanks to Gaudi's masterpieces like the famous Sagrada Familia, Park Güell or the Pedreda. The famous Ramblas crosses the city centre from the Place de Catalunya the the old port. On your route, stop at the boauería market to taste the local gastronomy or continue on to the old port to taste a paella in the sunshine. And to appreciate panoralic views of Barcelona, take a walk up the Tibidabo mountain.

Catalonia, between sea and mountains

Visit Catalonia in an RV and discover its two sides. The province owes a large part of its charm to the surrounding nature; on one side the mediterranean with its sparkling blue waters that glisten like precious rock, and on the other the mountains which offer breathtaking panoramas like the giant Montserrat mountain range or the Aigüestortes national park. What's more, coves are waiting to be discovered at the meeting point of coastline and mountain range, offering landscapes suspended in time and inviting travellers to bask in the sun and make the most of the sweet life in Catalonia.

Rent an RV in Barcelona

Seville has its own special flavour

The Andalusian capital is a mixture of art and tradition. Seville is characterised for its great arabic heritage and for a joyfull atmosphere in the streets, as well as for its high temperatures throughout the year. Don't miss the cathedral, the Giralda, the Royal Alcazar the Golden Tower or the square of Spain; the classic attractions that are a must-see! Take a walk through the Santa Cruz quarter, the most picturesque area of Seville. You will love the narrow streets with their white houses decorated with plants and flowers. Take advantge of the most delicious and deep rooted tradition in Andalusia; the tapas, and soak up the energy at a renowned "tablao de flamenco". To finish off, take your time to discover the mythical quarters of Triana or La Macarena and relax on the banks of the river Guadalquivir.

Set out on the andalusian road in an RV and discover the Doñana Park, located in the province of Huelva. It is a real paradise for nature lovers. Its marshes and vast plains will astound you. This protected area is home to an endangered species, the Iberian lynx, and various different birds such as cranes and storks. Situated at the meeting point of the Atlantic Ocean and the Mediterranean Sea, Andalusia offers you various different types of beaches. In Huelva, the Matalascañas beach is surrounded by the Doñana natural park, an unmissable sight in the region. The beaches of Cadiz, Puerto de Santa Maria, Chipiona or Tarifa are the ideal destinations for boardsports.

Rent an RV in Seville

A walk through the capital

The city that never sleeps is waiting for you...come and discover Madrid and its historic centre, cross the oriental gardens close to the royal palace as well as the Almudena cathedral. Stroll through the old city named “Madrid de los Austrias” by passing through the oldest and most lively districs like La Latina. Choose a good tapas bar near to the Plaza Mayor or try the local specialties like the calamari sandwich. Stand at the Puerta del Sol and soak up the city crossing the Madridean Gran Via. To finish up this beautiful day, go to the Templo de Debod; the egyptian ruins at the heart of the capital. It's the ideal lookout point for watching a romantic and poetic sunset.

Nature on the doorstep of the capital

Set out to discover the Madrid region by RV. To the north of the capital, you will find the Guadarrama mountain; a jewel of nature surrounded by beautiful landscapes. If you like outdoor sports, you can take advantage of many different activities like hiking or rock climbing the "Pedriza", a granite rock typical of the Guadarrama mountain. During the winter months, put on your skis and set off on the ski run at the ski resort of Navacerrada.

Rent an RV in Madrid

The mediterranean, olive trees and sunshine

Locally nicknamed “la Ciutat”, Palma has a pleasant climate which makes it an ideal destination for every season. From its paradise beaches and surrounding mountainous landscapes, you will be captured by the historic centre, which is notably the most lively quarter of the city, St Catalina. Lose yourself in the small streets to discover the arabic baths or sit down in a terrace at the square of St Eulalia. The hundred year old olive tree in the cetre of the square reveals an old lady's face depending on where you look from! Don't miss the Palma cathedral and its gardens, that flow majestically into the mediterranean sea.

Continue your jouney by RV and dicover the rest of the island, which is every bit as good as the Caribbean. Don't hesitate to play explorers to unearth the mot beautiful coves of the Mediterranean. Dip into the crystalline waters of the island and once night has fallen, enjoy the lively evenings and the nightlife. Sit down at a terrace next to the sea and live in the moment. To make the most of the mountain, the Valdemossa, Deia and Fornalutx villages are perfect choices.

Rent an RV in Majorca

Between religion and heritage

Granada owes its architectural jewels to a cultural and spiritual mix that can be found in the four different districts of the city: the 'Albayzín', of Islamic origins, 'Realejo San Matías', the old jewish quarter, 'Sacromonte' of gypsy origin, and finally, the 'Sagrario' city centre, of christian origin where the royal chapel housing the bodies of the Catholic Kings can be found. A UNESCO world heritage site, the Alhambra is the flagship monument of Granada. A huge palace surrounded by luscious gardens, it is one of the major monuments of Islamic architecture in the Mediterranean world. After the sun has set, you can enjoy spectacular lit up views of Granada from one of it lookout points, most notably the mirador of St Nicholas.

Right next to the Sierra Nevada

Pack your bags and set off in a camping car to the Sierra Nevada less than an hour drive away. The ideal destination for winter sports, you can also discover the Sierra by foot thanks to the Los Cachorros trail, which departs from the small town of Monachil. Between canyons and caves, andalusian nature reveals itself all long the the 3 hour route. On the slopes of the Sierra Nevada, you can find the mountainous region of the Alpujarra, known for its thousand-year-old white villages like Pampaneira, Capileira and Bubion.

Rent an RV in Granada

The Pearl of the Cantabrian Sea

St Sebastian, or 'Donostia' in Basque, is also called the Pearl of the Cantabrian Sea. The Urumea river crosses the city and each of its riverbanks has its own special atmosphere. On one side, the new city with its many boutiques, and on the other, the old town with its monuments like the Basilica of Santa Maria del Coro with its old port and its quaint backstreets scattered with tapas bars. The "pintxos" available to taste are a real institution in the Basque Country and a real treat for the taste buds. Before you leave, take a trip by cable car to the top of mount Igeldo. In addition to the stunning views, smaller ones will enjoy the theme park situated on top.

Between the ocean and mountain

For surfing or bathing, the town offers lots of beaches; Zurriola, Ondarreta or the island of Santa Clara. But if you want more, set off in your RV to Zarautz, Getaria, Orio or Zumaia. These are the adorable small towns lined wih magnificent beaches, less than 30 minutes away from St Sebastian. But surfing isn't the only activity you can do! The cliffs and mountains that run along the coastal path are excellent headlands allowing you to appreciate the view and the surrounding natural landscapes, as well as offering you several hiking routes.

Rent an RV in Donostia